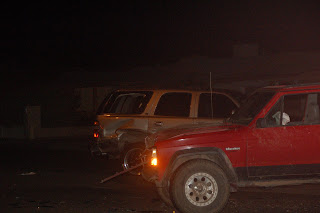 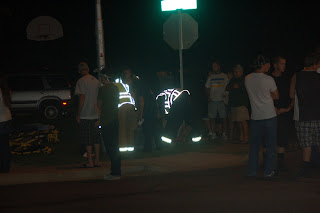 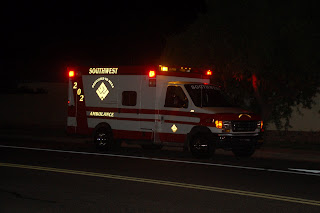 Last night, the girls invited some friends over to watch a movie outside on the projector. Part way into the movie, a group of high school kids (a few of which Haley knew), stopped by to say "hi". They stayed for less than five minutes, piled back into the car, and sped down Oracle. The 16 year old driver became distracted, missed the stop sign at 8th Street, barreled through the intersection and was hit broadside by a car heading east on 8th Street. The collision was loud and brought all the neighbors out of their houses. None of the teenagers were wearing seat belts. Two boys were transported to hospitals, one requiring five staples to his head, the other with a concussion. Friends were there immediately, followed by firetrucks, ambulances, and eventually the police and parents. Luckily, no one was severely injured, but after the movie was over and friends left, a discussion ensued reiterating our family rules and what we had learned.

2. NO driving with young, inexperienced drivers

3. Driving is a HUGE responsibility and not one to be taken lightly.

4. When you get dropped off at a party or event, that is where you stay.
NO LEAVING without permission

5. NO TEXTING OR TALKING ON THE PHONE while driving

6. ALWAYS tell the truth to your parents, even if you have made a bad choice

7. GOOD FRIENDS with your same values, rules and standards are sooooo critical

8. Your privileges are dependent upon choosing good friends and maintaining trust

9. When your parents lecture, warn and threaten,
IT IS BECAUSE THEY KNOW WHAT THEY ARE TALKING ABOUT,
NOT BECAUSE THEY ARE CRAZY!

Great reminder. We'll have to review your rules tomorrow at FHE. We're so glad everyone is OK~

These are great rules. I am going to write these down. Fortunately, I am not dealing with teenager drivers, yet. I am glad none of your girls were in the car and that no one was hurt.